Urgent: The first 100 days of cybersecurity in the Trump Administration

A presidential commission has made 16 urgent recommendations to improve the nation’s cybersecurity, including creating a nutritional-type label to help consumers shop wisely and appointing a new international ambassador on the subject — weeks before President-elect Donald Trump takes office.

The release of the 100-page report follows the worst hacking of U.S. government systems in history and accusations by the Obama administration that Russia meddled in the U.S. presidential election by hacking Democrats.

The Presidential Commission on Enhancing National Cybersecurity urged immediate action within two to five years and suggested the Trump administration consider acting on some proposals within its first 100 days.

It urged steps, such as getting rid of traditional passwords, to end the threat of identity theft by 2021 and said Trump’s administration should train 100,000 new cybersecurity workers by 2020.

“What we’ve been doing over the last 15 to 20 years simply isn’t working, and the problem isn’t going to be fixed simply by adding more money,” said Steven Chabinsky, a commission member and the global chair of the data, privacy and cybersecurity practice for White & Case LLP, an international law firm.

He said the group wanted the burden of cybersecurity “moved away from every computer user and handled at higher levels,” including internet providers and product developers who could ensure security by default and design “for everyone’s benefit.”

The White House requested the report in February and intended it to serve as a transition memo for the next president. The commission included 12 of what the White House described as the brightest minds in business, academia, technology and security. It was led by Tom Donilon, Obama’s former national security adviser.

It was not immediately clear whether Trump would accept the group’s recommendations. Trump won the election on promises to reduce government regulations, although decades of relying on market pressure or asking businesses to voluntarily make their products and services safer have been largely ineffective.

Plus, Trump openly invited Russian hackers to find and release tens of thousands of personal emails that Clinton had deleted from the private server she had used to conduct government business as secretary of state. He also disputed the Obama administration’s conclusion that Russia was responsible for the Democratic hackings.

Under Obama, hackers stole personal data from the U.S. Office of Personnel Management on more than 21 million current, former and prospective government employees, including details of security-clearance background investigations for federal agents, intelligence employees and others.

The law, passed by the standing committee of China’s legislature and issued publicly on Nov. 5, tasks agencies and enterprises with improving their ability to defend against network intrusions while demanding security reviews for equipment and data in strategic sectors.

The law includes provisions such as a requirement that internet operators provide unspecified “technical assistance” to authorities in cases involving national security. It also requires security checks for equipment used for “critical infrastructure,” which is defined as including information services, energy, transportation, finance and other important sectors.

During the drafting, the law was criticized by some foreign business groups and technology experts as a blueprint for further walling off China’s already isolated internet. China’s lawmakers described the law as necessary to bolster its online security at a time of multiplying threats.

China, which is often accused of supporting cyberattacks on other countries but which says it is a frequent victim of hacking, has moved aggressively to bolster cybersecurity since Chinese President Xi Jinping took office four years ago.

CyberTECH is pleased to announce the opening of its in-house coffee shop, Grind. By introducing a fully functioning cafe, CyberTECH is addressing one of the challenges for workers in the Banker’s Hill area – good coffee. With very few cafes and restaurants within walking distance of the CoWorking offices at First and Fir, CyberTECH Members have struggled to fulfill their coffee break needs.

On November 10, the Grind will start providing hot drinks like mochas, lattes, and Americanos. With a focus on high quality beans and well-crafted beverages, Grind will be offering European-inspired products. CyberTECH facility manager, Mo Rahseparian, brings his years of restaurant ownership experience to ensure customers enjoy the highest quality products and services.

Starting with a wide selection of hot beverages, Grind will be expanding its line of products over the coming weeks and months. Cold drinks, bottled drinks, snacks, and sandwiches are all vital components to ensuring every visitor can find something to eat or drink.

And Grind will be open to everyone. Of course, the primary customers will be those Members inside the CyberTECH community. But the building at First and Fir houses office employees and healthcare workers that will be able to easily take advantage of the food services. In addition, Banker’s Hill residents and workers will have access to the Grind coffee and food. CyberTECH Members will get a hefty discount on any purchases.

Initially, operating hours will skew towards the morning with service starting before 8am. And because the shortage of lunch options in the area, the cafe will operate through the lunch hour. Extended and weekend hours will be determined based on demand and need.

On the evening of November 10, 2016, I attended the San Diego CyberTECH Good Neighbor Pitch Night event. I estimate about 200 people attended throughout the night to eat, drink, network, and watch that night’s ten participating Entrepreneur in Residence (EIR) companies give Pitches to qualified judges to assess individual presentations for content.

I am one of the EIR Advisors that assist these companies as they progress within the program. Companies wishing to apply to the EIR Program may learn more about it on this page.

Here are some images from the night.

CyberTECH will soon launch its Immersive and Emerging Technologies Lab, it will be housed in xHive which is located on the 2nd floor of NEST CoWork.. Because virtual reality (VR) and augmented reality (AR) continue massive expansion in the personal use and professional use markets, CyberTECH is setting aside a space to explore both personal and business uses of any and all advancements. The lab space will include all three major VR platforms – HTC Vive, Oculus Rift, and Sony PlayStation VR.

Three CyberTECH Members are already reserving the space for research and product development. 360 Stock VR, Built by Web 3, and MiPOV Technologies will be the first in-house users. These three companies will be working with CyberTECH staff to ensure expandable capacity while maintaining everyday ease of use.

In an effort to offer a full line of three dimensional services, CyberTECH is happy to announce its Member, SD3D, will have a permanent kiosk in the Grind Café lobby. The 3D printing kiosk offers product samples and a web-based ordering system for customers looking for three dimensional solutions.

Both the 3D printing kiosk and the VR lab will be available for trial and review at CyberTECH’s 3rd Annual Good Neighbor Taste of San Diego event on 10 November.

CyberTECH is both proud and sad to announce that 3D manufacturer and Member, Sympathetic Innovations, will be moving out of the First and Fir building and into a larger warehouse in National City. Alejandro and Matthias have been exceptional Members and we are thrilled they have used their time inside CyberTECH to grow. You’ll be missed!

As part of Good Neighbor Taste of San Diego, Thursday, Nov. 10, 6-7 pm, at NEST CoWork Space, our initial cohort of Entrepreneurs in Residence (EIR) will get a chance to present their Power Point decks to a panel of experts.

Each EIR company will have three minutes to pitch to venture cap and business judges, followed by a five-minute Q&A – a total of eight minutes per pitch. Winners will receive prizes and also advance to San Diego Startup Week Pitchfest in June 2017. The event will be led by our co-chairs Dave Titus @CooleyLLP and Andrew Berkhausen @ScaleMatrix. Ashok Kamal from @Techcoastangels will also be participating.

ABOUT CyberTECH’S Entrepreneur in Residence (EIR): 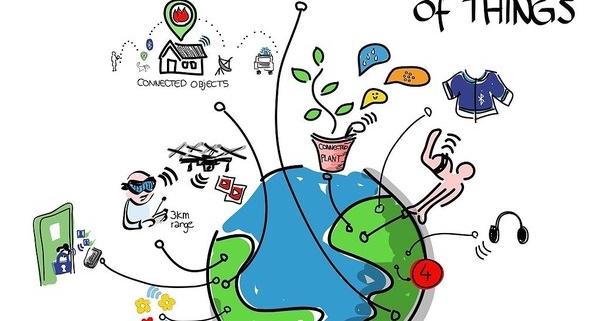 Addressing the topic of the Internet of Things (IoT) during RIPE 72, one of the speakers started his presentation with the observation that, “The IoT won’t make you rich.”

However, he then went on to conclude that, “You can make a living at the same time as having fun and making the world a better place.”

There’s been a lot of talk about the economic opportunities that the IoT might provide, but ignoring the obvious driver to make money, what else can be done with the IoT to make the world a little bit better?

Many well-known Internet institutions weren’t founded with the intent of getting rich – in fact, you can argue that the inception of the Internet itself wasn’t aimed at obtaining any commercial success.

Many Internet organizations are established as not-for-profits, and a lot of critical Internet services are not operated with the primary purpose of making money, but simply as an enablers that exist for the good of the Internet.

Times have changed, of course, and the Internet has turned into a commercial success that allows many people to make a living – and some to even get rich.

If any, the projections for what is commonly referred to as the IoT are even more optimistic, full of forecasts that connecting everything together and processing vast quantities of data will allow even bigger commercial success and profits to be made.

Yet at the same time, many concerns have been raised – especially by those who understand the technology – about the risks involved with an ever more connected society and the dependencies this creates for our economic well-being.

These issues range from questioning the scalability of it all to the dangers of cyber warfare, where a well-aimed attack could cripple an entire country.

Each business represents a new and emerging approach to business by utilizing technology to spur further growth. The businesses have access to low-cost office space inside the First and Fir office along with other Member benefits like high-speed internet, printing, event space, and networking opportunities.

Moreover, these business owners have access to a rigorous regime of one-on-one coaching with industry experts and business professionals. The primary goal of these coaching sessions is to steer each business towards stability and growth. Stability becomes a key factor in the long-term viability for small business owners. While many small businesses experience short bursts of growth due to unique opportunities or market conditions, many of those same businesses fall short of creating a sustainable financial future. The EIR program intends to help those business owners avoid those pitfalls with coaching and mentoring.

The 2016 EIR Cohort 200 group represents a range of industries including cyber-security, drone technology, sports media, and insurance. All the business share an enthusiasm for technology and an entrepreneurial spirit. CyberTECH will officially welcome the second Cohort Class of 2016 at 3rd Annual Good Neighbor fundraiser on Thursday November 10th from 5:00 PM to 9:00 PM.

Visit the Entrepreneur in Residence Program for more details